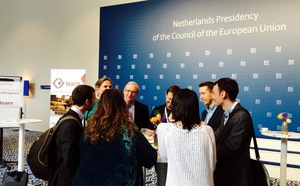 The first week of April saw Amsterdam host the two-day Open Science Conference which was devoted to establishing an action plan to foster and promote open science. On the first day there were several panels introducing the current situation and the problems and challenges faced by this topic. The second day was focussed on action and this was where LIBER played an outstanding role by organising an interesting World Café for the afternoon session. This World Café was structured around four different areas, each dedicated to one of the EU funded projects in which LIBER participates in the arena of open science, i.e. FutureTDM, LEARN, PASTEUR4OA and FOSTER.

The methodology of the café was to invite participants to join one of the groups for a period of time and then move to another, or to stay in the same group as they chose. Each group was hosted by two of the people working in the relevant project – in the case of LEARN the hosts were Paul Ayris and Ignasi Labastida. The first host introduced the methodology of the Café while the second one explained the project itself. Once introductions were made, the hosts invited the participants to form small groups of four or five people to discuss some given statements for 20 minutes, and then finally to record two or three proposed future actions as a result of their discussions. 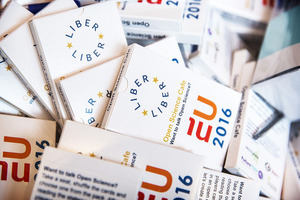 Thanks must go to LIBER for creating a set of cards with creative and provocative statements which acted as catalysts for fruitful discussions. The discussion cards were picked randomly by the participants to initiate the conversation. The full pack of cards included not only statements related to the LEARN Project, but also to the three other projects.

The six statements on Research Data Management were:

Data Sharing is more important than Open Access to publications

Researchers only think about RDM if it is imposed upon them

Open Data should be a responsibility of the institution, not the individual researcher

Some of the issues that surfaced in the discussions included the need to establish clear policies on research data; to assess data management plans in order to get feedback; and to train researchers and staff on research data management. Almost all of the participants agreed that the design of an open data implementation plan is a collaborative task in which all the different stakeholders within an institution need to be engaged. Other proposed actions included: the need to avoid dichotomies among open data and open access to publications, and to look at them as one issue; to ask funders to foster and acknowledge the reuse of data; and to provide quality preservation  and storage services which incentivise researchers to share their data.

As a conclusion we think the World Café was a productive and positive experience that led to interesting discussions among different stakeholders (researchers, publishers, funders, librarians) and resulted in some proposed actions that reinforce the main objective of our project, namely to develop a toolkit to help institutions build and implement a research data policy. We expect to repeat the café experience in future workshops or events.