Highlights of the Fifth LEARN Workshop in Barcelona

A year after the first LEARN Workshop in London, Universitat de Barcelona hosted the fifth and last workshop of the Project. The Aula Magna of the university was the chosen venue to hold this final workshop entitled ‘Shaping and Aligning Research Data’.

On the morning of 26 January 2017, around fifty people attended the workshop — all of them geared up to participate actively in the discussions about how to create and implement a research data policy in a research institution. The morning sessions started with a welcome by Oriol Pujol, the new vice-president of Digital Transformation of the host institution, who later participated in his expert role as a researcher in machine learning. 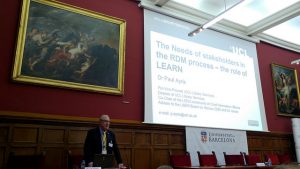 The first speaker was the principal investigator of the LEARN Project, Paul Ayris, Pro Vice-Provost & Director of University College London (UCL) Library Services, who introduced the work done during this year and a half by the Project consortium and shared results from a survey done at UCL among its researchers about research data. After this introduction, Marie Timmermann, EU Legislation & Regulatory Affairs Officer at Science Europe (SE), showed the proposal developed by the SE Working Group on research data: i.e. the creation of research data management protocols. Those protocols could help researchers to complete the Data Management Plans (DMPs) that are required by funders.

After the coffee break, three more speakers revealed different and complementary points of view. The first was Daniel Mietchen, a biophysicist by training, and currently a researcher working at NIH. He shared with the audience his view as an open scientist. He showed new tools, new ways of doing science and new ways to reuse data broadly. Moreover he challenged the participants to share any result openly, and said the Project should provide not just a policy but a machine readable one.

Eva Méndez, Deputy Vice-President for Strategy and Digital Education of the University Carlos III of Madrid, spoke from the viewpoint of the university sector commenting on the policies, motivators and challenges around open science landscape and research data management in special. Moreover, as a member of the Open Science Policy Platform, she pointed out some of the issues that are on discussion at the European level on those topics.

The morning session ended with Oriol Pujol’s talk. He is a researcher from the Department of Mathematics and Computer Science at the Universitat de Barcelona, and his talk was divided in two parts. First he shared his experiences with openness as a member of the machine learning community and, second, he showed the audience how machine learning can help in solving the problem of sharing sensitive data.

The afternoon was devoted to breakout sessions and a final discussion panel. The audience was divided in three different groups, each led by a Project partner. The main topic of discussion was related to the model policy elaborated by the Project. All the participants had a copy of the current document, still in draft, along with the evaluation grid carried out by the member of the University of Vienna when assessing the different research data policies in place in Europe.

After the breakout group discussions, all participants returned to the Aula Magna for the final session: a panel discussion chaired by Paolo Budroni, from the Library and Archive Services of the University of Vienna, with the three chairs of the breakout sessions and three of the morning speakers. This final panel remarked on the need to have an institutional policy in relation to research data, without forgetting the creation of new services, new incentives and an alignment with other existing policies.

Videos of the workshop can be found on the LEARN RDM YouTube channel.