Strategic Alliance between the European Commission and ECLAC is Renewed 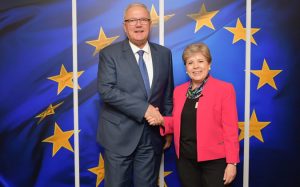 Neven Mimica, the European Union Commissioner in charge of International Cooperation and Development, and Alicia Bárcena, Executive Secretary of ECLAC, met in Brussels. Photo courtesy of the European Commission.

The LEARN Project has five partners and, uniquely for an EU-funded project, one of them is based in the South American country of Chile. The Chilean-based partner is ECLAC, the Economic Commission for Latin America and the Caribbean (ECLAC), and recently ECLAC’s Executive Secretary, Alicia Bárcena, travelled to Brussels to meet Neven Mimica, the European Union Commissioner in charge of International Cooperation and Development.

They agreed to renew the strategic alliance between ECLAC and the European Commission to support dialogue and bi-regional cooperation, particularly in light of the challenges posed by the 2030 Agenda for Sustainable Development.

During the same trip, Bárcena also met with officials from the European Commission’s Directorate-General for International Cooperation and Development (DG DEVCO) to present an economic and social overview of the region and share some of ECLAC’s reflections regarding the current global scenario.

In a presentation entitled “Latin America and the Caribbean in the new international context: challenges and opportunities for renewed cooperation with the European Union,” she indicated that economic policy has undergone a radical transformation in the 10 months since the approval of the United Kingdom’s exit from the European Union (Brexit) in June 2016.

These transformations include the weakening of multilateralism, a return to protectionism, an increase in extreme political movements and a growing trend toward international conflicts. Bárcena explained that it is precisely international cooperation that must serve to regulate markets, manage global tensions, reduce inequalities and keep all actors committed to an open international system that safeguards public goods and shared and inclusive prosperity.

In this context, there are concrete opportunities to strengthen the strategic partnership between Latin America and the Caribbean and the European Union in response to current global uncertainty, she contended.

Through dialogue and bi-regional cooperation, progress can be made toward implementing the 2030 Agenda for Sustainable Development, as well as generating quality foreign direct investment, promoting social inclusion, empowering micro-, small- and medium-sized enterprises, fostering sustainable cities and the knowledge society, and attaining compliance with the Paris Agreement on climate change, Bárcena enumerated.

Exchanging experiences regarding mechanisms for regional and subregional integration in the new international scenario is also a path toward consolidating historic cultural and trade relations between both regions, ECLAC’s most senior representative sustained.

With regard to the regional situation, the Executive Secretary explained that one of the chief challenges for increased productivity in Latin America and the Caribbean is the technological gap, because it hinders productive diversification and the creation of quality jobs. She therefore called upon the countries of the region to make greater strides in this area with the support of international cooperation.

During her presentation she also highlighted recent achievements by the strategic partnership between ECLAC and the European Commission, including the successful implementation of the EUROsociAL program (2012-2015) and the Alliance for the Information Society – @LIS (2001-2013).

Programs currently underway in addition to LEARN include the EUROCLIMA program on climate change (2010-2017), the project Better policies for micro-, small- and medium-sized businesses in Latin America (2015-2020), and Social innovation: A driver of social change (2014-2017).