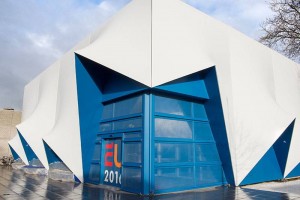 The Europe Building, where the conference will be held (Image CC0).

These World Cafés are being co-organised by LIBER and representatives from several  European Funded projects in which LIBER participates will help coordinate the discussions on 5 April. LEARN will coordinate the session on research data management, while FutureTDM will contribute to the session on text and data mining; FOSTER to the discussion on training and skills; and PASTEUR4OA on Open Access Strategies;

The conference is run by the Dutch government, as part of its current EU Presidency. Over 300 politicians, officials, researchers, publishers, universities and research organisations from across Europe will attend. As organisers wrote on the conference website:

At this Presidency conference member states and stakeholders can emphasise the importance of this transition. They will also launch the Open Science Policy Platform and draft a joint action agenda.

The Netherlands hopes to genuinely accelerate the transition to Open Science, especially in terms of open access to scientific articles that are published internationally and the optimal, responsible re-use of scientific data.

The conference outcomes will be shared with stakeholders, the Open Science Policy Platform and the European Ministers for research and innovation at the meeting of the Competitiveness Council being held in Brussels on 26-27 May 2016.