LEARN is an EU-funded project, led by UCL Library Services, on the topic of research data management. 83 registered delegates attended the day from the UK, the continent of Europe and Santiago in Chile. Attenders were librarians and IT staff, researchers, research funders, and research organisations. The LEARN project partners are: UCL, Universities of Vienna and Barcelona, LIBER (Association of European Research Libraries) and the UN Library (CEPAL) in Santiago, Chile. 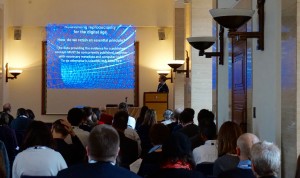 LEARN has as its ambition to deliver a model Research Data Management (RDM) policy, a Toolkit highlighting Best Practice and Case Studies in RDM, and an Executive Briefing for decision makers on RDM in 5 languages. The London Workshop was the first in a series of Workshops in the next 18 months being held by all the partners.

The Workshop was introduced by Professor David Price (Vice-Provost, Research, UCL) and the keynote speakers were Professor Geoffrey Boulton (Edinburgh), Dr Paul Ayris (UCL), Professor Sabina Leonelli (Exeter) and Dr Peter Murray-Rust (Cambridge). The keynotes set the tone for the day and helped to explain what the LEARN project is designed to achieve. 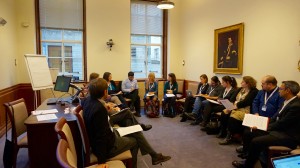 The afternoon session was devoted to 4 Breakout Groups, where the participants were asked to identify issues, interests and Best Practice Case Studies in RDM. These were then reported back to the plenary session and will form the bedrock of the LEARN Toolkit, one of the project deliverables.

The plenary sessions were videoed and will be made available on the LEARN website shortly, along with the speakers’ PowerPoint presentations and Reports from the Breakout Groups.

LEARN will return to the UK in 18 months’ time, as we will also be holding the end-of-project Conference here in London.