The Italian OpenAIRE National Workshop: The LEARN Project in Rome

Over the last two days of May, the Consiglio Nazionale delle Ricerche (CNR) hosted the Italian OpenAIRE National Workshop organised by Cineca in Rome. Cineca is the National Open Access Desk (NOAD) in Italy. The two-day workshop focused primarily on the present situation and the future prospects for Open Science.

In the first day we reviewed three relevant EU funded projects that have finished, or which are finishing in the next months. Antonio Vetrò, from the Nexa Center for Internet & Society  in Torino, presented the Pasteur4OA Project dedicated to the alignment of open access policies. Marina Angelaki, from the Greek National Documentation Center (EKT), presented the main outputs of the RECODE Project: a set of policy recommendations for facilitating open access to research data. While Jose Carvalho, from the Portuguese University of Minho, presented some activities from the FOSTER project aimed at training young researchers in open science. All three projects share some elements with the LEARN Project: policies, research data, and training. For this reason the Workshop provided a good opportunity to share some experiences and results.

The morning session ended with Marjan Grootveld from DANS talked about the Dutch experience with the Open Research Data Pilot from Horizon 2020 and shared a practical case study on how to develop a Data Management Plan (DMP). 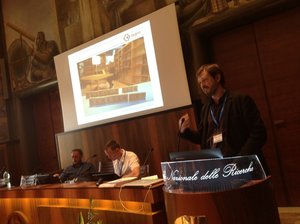 In the afternoon there was a session devoted to OpenAIRE. Paolo Manghi, from CNR, presented some developments in the OpenAIRE infrastructure in order to tackle some new challenges which have arisen from open science, while Federico Ferrario, from Cineca, showed the Italian Research Information System (IRIS) and its compliance with the OpenAIRE guidelines.

The day ended with the University of Bologna’s experience of supporting researchers in developing a DMP as required in the framework of the Open Research Data Pilot, and the study developed by IFLA about data curators.

The second day started with two interesting keynotes, one from Roberto Caso from the University of Trento and the second one from Julia Reda MEP. Professor Caso talked about the values of the Open Science such as democracy, transparency, equity, cooperation, and moral integrity remarking on the need to change the current research assessment systems. Meanwhile, Reda presented the latest news about the European Copyright Reform focusing on Text and Data Mining (TDM) and the current Consultation on Ancillary Rights. She made clear her support towards a broad exception for TDM without any limits to users or intended uses, as well as her opposition to new neighboring rights, especially towards scientific publishers.

After the two keynotes, there was the time for the researchers to make their contributions. The Dutch Professor Barend Mons, chair of the Commission High Level Expert Group European Open Science Cloud (EOSC), presented the EOSC and he remarked the importance of going beyond open access to publications, a point also supported by Björn Brembs, the second panelist from the University of Regensburg. Brembs, a professor of neurogenetics, explained how he conducts research openly and asked for developing new infrastructures and technologies to fulfill the current needs of researchers doing open science. He suggested that cost of those developments could be covered by the budgets currently dedicated to paying for journal subscriptions.

The second morning ended with the participation of two of the partners of the LEARN project. First, Paolo Budroni, from the University of Vienna, showed the survey developed in Austria about how researchers deal with their data. This survey was conducted in the framework of the Austrian e-Infrastructures project. Ignasi Labastida, from the University of Barcelona, presented the LEARN project showing the main goals but also the first outcomes of the two workshops already held in London and Vienna, and the first results of the survey on the readiness to manage research data.

LEARN: Helping Institutions to Build and Implement a Policy on research Data from LEARN Project

The workshop ended in the afternoon with a session dedicated to show Italian experiences from universities and research institutions working with research data from several disciplines.

Overall the two days provided a good opportunity to show the LEARN Project to Italian universities and research centres. These institutions were mainly interested in the initial outcomes of our two workshops, and the new workshops still to come, as well as in the self-assessment tool on how ready an institution is to manage research data. Until recently the LEARN survey has not had any contributions from Italy, so now the hope is that we will collect more information from this country. Certainly from the examples presented in the workshop it looks as though many Italian institutions are indeed ready.