Research Data Management in Latin America and the Caribbean: an overview

The United Nations Economic Commission for Latin America and the Caribbean, ECLAC, is one of the LEARN Project partners. Working in this project has allowed us to see how people and institutions in our diverse region are taking significant steps in in the management of research data.

The wide variety of initiatives in Latin America and the Caribbean ranges from new laws to the creation of policies in government funding agencies and the implementation of data repositories in universities and research institutions.

In the legal domain, Peru and Argentina have recently enacted laws that will change the way institutions and researchers manage their data. These legal norms set new requirements for individuals and organizations whose research is publicly funded, as they will have to share their data in institutional and national repositories open to the public. In both cases, this has led to the development of technical infrastructure to make data management and sharing possible: the National System of Repositories (SNRD) in Argentina and the National Digital Repository of Open Access Science, Technology and Innovation (ALICIA) in Peru. In Mexico, a decree issued in 2014 introduced reforms to the Science and Technology Law of 2002 in order to promote and democratize access to scientific information, mandating the creation of a National Repository in which research data could be incorporated. It is expected that these norms will enhance the advancement of RDM in each country, and to foresee the development of standards, policies and/or guidelines to support its implementation.
Where no specific laws exist, government agencies are making efforts to contribute to data sharing and reuse. In Chile, the National Council of Science and Technology, (CONICYT), has published on its Scientific Data website an Open Data Policy Proposal, which is currently open for consultation, and which, if approved, will require researchers whose work has been funded by the agency to publish their data in open repositories. Another example is FAPESP, the funding agency of the Sao Paulo State, in Brazil, which currently requires that researchers applying for funds from the e-Science Program to present Research Data Management Plans.

In the technical domain, data repositories are being created in and across Latin American institutions. A particularly good example is the initiative of the Brazilian Institute of Science and 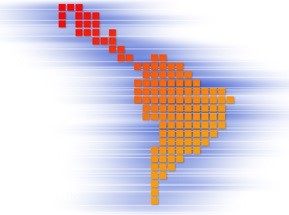 Technology (IBTC), which created Rede Cariniana, a network of digital preservation services available to five Brazilian universities (USP, UNICAMP, UFPB, UFSM and UEMA). These institutions will now have access to Dataverse, a network created by Harvard University, in which they will make available the research data generated by their researchers in all fields of knowledge.
In addition institutions are also creating discipline-specific repositories, one example is the Data Center of the Universidad de los Andes in Colombia, which operates a platform that gathers economic data generated by the University’s own Centro de Estudios de Desarrollo Económico (CEDE) and also acquires datasets through agreements with third parties, many of them being made open for reuse.

A field that seems to be taking a lead on data sharing is biodiversity, proving that data usefulness transcends a single institution and even a country. Many examples of this type of repositories can be cited: the National System of Biodiversity Information of Mexico, the System for biodiversity and the environment (SIBA-UNAM) (an interdisciplinary repository of linked biologic and geospatial data), the Biodiversity Data Portal of Brasil, the Iberian-American Infrastructure of Biodiversity Information in which several Latin American countries participate, and Pandora, a network of distributed repositories of biodiversity data in Chile. There are also a few projects related to other areas of knowledge, as the Interactive Platform of Research for Social Sciences, a project led by the Ministry of Science and Technology of Argentina, in which six institutions will openly share their data.
These are just a few examples of the efforts that institutions in Latin America and the Caribbean are making to work on the development of policy and infrastructure needed to make research data management possible. Although much more work and collaboration is still needed, individuals and organizations are creating awareness of the benefits of data sharing and reuse, a challenge to which LEARN and CEPAL hope to contribute.