Report from the Jisc Research Data Network meeting – May 2016

On Wednesday 18th May 2016 Matt Mahon (UCL Library Services) attended the Jisc Research Data Network meeting at the University of Cardiff. This is his report from this event.

“The day was organised in order to allow colleagues working on research data management across different UK higher education institutions to share their experiences of setting up various aspects of Research Data Management (RDM) services. In many cases (including here in UCL Library Services), it is easy to feel like there is no benchmarking or best practice against which to measure a service, and Jisc has begun important steps to remedy that.

You can find all the slides and further information about the event on the Jisc research data network. 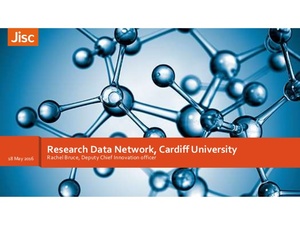 As well as promoting information sharing, the event also served to highlight the Jisc Research Data Shared Service (RDSS), which is currently under development. Rachel Bruce, Jisc’s deputy chief innovation officer, introduced the workshop and highlighted Jisc’s new research data network (researchdata.network). This will be a community space for bringing together discussions, advice from colleagues and example documents including costings and work plans.

Catherine Grout, the head of change implementation support, outlined the timeline for the RDSS and gave an update on progress. The commissioning phase is complete, and suppliers have been selected for the components of the service. Alpha development will begin presently. As well as the research data network, a Jisc toolkit for Research Data Management is on the way.

The majority of the sessions I attended were about costing and planning for RDM activity, and it was very reassuring to see other institutions coming across familiar issues and opportunities. Marta Teperek from the University of Cambridge Research Data Facility demonstrated an impressive model for funding RDM activity. Their model splits costs into facility costs, which must be borne by every project, and optional costs which will depend on the research projects’ different requirements – for instance, the extent to which a project requires active and ongoing data management, and the choice of different repositories for long-term preservation and access.

Frances Madden and Dave Cobb from Royal Holloway, University of London demonstrated how they modelled their institutional RDM requirements from a Data Asset Framework/Collaborative Assessment of Research Data Infrastructures and Objectives (CARDIO) Lite survey. They found that it was preferable to offer a universal service to all researchers which will offer unlimited storage for active data and up to 2TB for long-term preservation. This model, of a free service up to a certain capacity, seems to be increasingly widely adopted. The question of how to extrapolate from individual researchers’ examples to an institutional scale is also very interesting, especially given the consensus that it is very difficult for even researchers themselves to forecast their own future requirements.

I also attended a session from Graham Hay of Cambridge Econometrics, who are producing a high-level cost/benefit model for RDM activity. There was extensive discussion in the room of the extent to which RDM activity could be said to bleed into all research activity – for instance, it is increasingly difficult to distinguish between data acquisition as a research activity and the immediate curation of that data as an RDM activity. The question of what can be treated as an RDM cost – and therefore what should be supported directly by the institution or indirectly by funders – will rest on questions such as this.

As well as the talks, the free time between sessions was also useful to discuss developments with colleagues from different institutions, and to hear more about their experiences as part of the RDSS pilot. Jisc are undertaking a massive and potentially great project, and by including the development of human networks in what otherwise would be purely an infrastructure project, are already helping to spread the load of RDM service development.”

[Our thanks to Matt for writing this report]