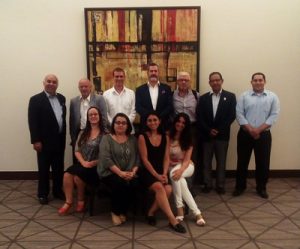 The LEARN Project was presented at an Open Data Meeting in Panama by project partner ECLAC.

On invitation from the International Council for Science – Regional Office for Latin America and the Caribbean (ICSU – ROLAC) and CODATA, the Hernán Santa Cruz Library (ECLAC) — a LEARN Project Partner — participated in the region’s first Open Data meeting, organised in Panama City, Panama on 12-13th January 2017.  The purpose of the meeting was to develop an Open Data/Open Science strategy in the region and to prepare a wider stakeholder meeting later this year.

Each of the participants presented their and other relevant initiatives in the realm of Open Data and Open Science. Wouter Schallier (UN/ECLAC) presented the LERU Roadmap for Research Data, a document with guidelines and recommendations freely available, which can be used by research institutions in Latin America and the Caribbean (LAC) wishing to implement a Research Data Management (RDM) Policy. Wouter Schallier also presented the work the LEARN Project has been doing in the region, such as:

There are several initiatives in the area of repositories and Open Access to publications, but the implementation of RDM policies remains scarce in the LAC region. Successful RDM initiatives often act in an isolated way. The participants agreed on the need for a regional platform, led by ICSU-CODATA, where Open Data/Open Science initiatives can be shared.

Several national governments in Latin America and the Caribbean have already a legal framework for Open Access/Open Data/Open Science, but this is not reflected on the institutional level. Also, as was extensively discussed at the LEARN workshop in Santiago de Chile, most institutions lack RDM skills amongst their staff. The LEARN Project wants to address the two main challenges around policies and skills on an institutional level .

Another area of work is metadata and interoperability of data repositories, where LA Referencia is liaising with the European OpenAIRE/COAR network in order to guarantee compatibility of standards.

Wouter Schallier expressed his commitment to support, through the LEARN Project, the ICSU/ROLAC-CODATA platform initiative in order to include all relevant initiatives from all LAC countries, taking advantage of the RDM network that the project has already built.

As a conclusion of the meeting, a matrix of priorities, relevant initiatives, stakeholders and needed resources for the region was defined amongst the participants, as well as a roadmap for Open Data/Open Science in Latin America and the Caribbean. Finally, the practical arrangements for the stakeholder meeting later this year were agreed on.

See also the report of this meeting on the ICSU-ROLAC web page.